Efficiency is the name of the game for future insurtech solutions 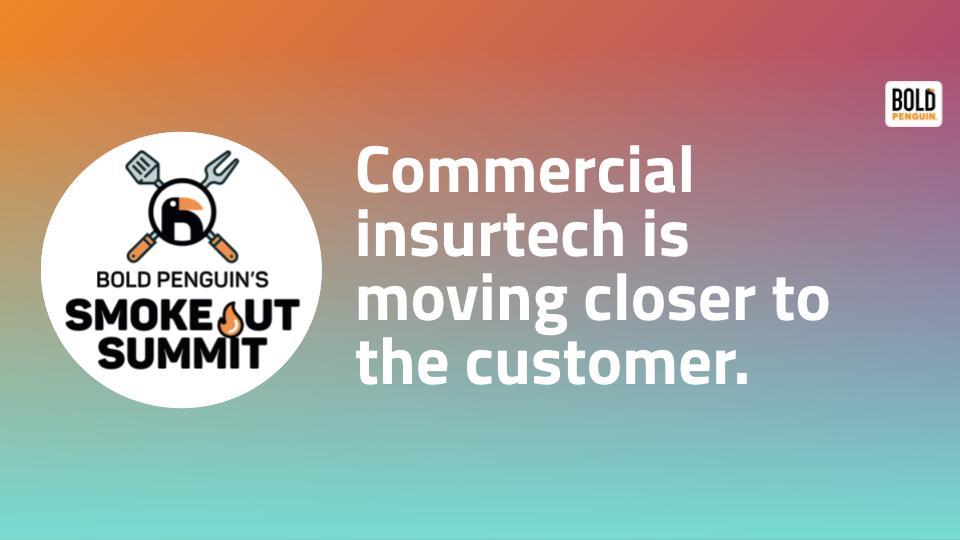 I would like to thank all of the insurance industry leaders that attended the Bold Penguin Smokeout Summit in Chicago on August 5th. Bold Penguin hosted these insurance professionals interested in the state of insurtech at a lunch reception, and then everyone attended the Windy City Smokeout Concert and BBQ festival afterwards.

As part of the lunch reception, I shared a new presentation – The Insurtech Smokeout. In it, I reviewed the current state of insurtech, macroeconomic factors impacting all technology companies, and provided a review of commercial insurance and how it has evolved alongside insurtech. The audience was fantastic and engaged in a robust discussion of insurtech and commercial insurance.

Here are some key ideas and insights from the event:

My dad once told me everything is cyclical; venture-backed technology companies are definitely part of a cycle. That cycle starts with a funding event and ends with an exit that typically takes 7-10 years. And so I believe the current insurtech cycle – what I call “Insurtech 1.0” – started sometime in 2012 (even though the word insurtech wasn’t yet being used) and ended sometime in the early part of 2022. One of the most important technologies that contributed to Insurtech 1.0 was the implementation of APIs across numerous insurance carriers that then powered integrations with new technology companies.

Bold Penguin (and similarly-situated agent-powered insurtechs) have not been severely impacted by this overall insurtech decline, thank goodness.

On the other hand, Agent-Powered insurtechs are those companies that build insurance technology used by agents. Bold Penguin is an example; if you have any question about our growth trajectory, you can peruse our jobs board (we are hiring!), or our acquisition appetite (we recently acquired Insureon). But you can also see the power of Agent-Powered insurtech in the accelerated adoption of Bold Penguin among Main Street agents after 2020. In early 2020, Bold Penguin launched the Agent Terminal, our Software as a Service solution for Main Street agents looking for small business insurance digital quoting. There has been an explosion in demand (sorry, we generally don’t disclose numbers):

But Bold Penguin is not the only Agent-Powered insurtech accelerating; Ascend is an insurance payments platform that announced a $30 million financing round in January 2022. Another example would be Pathpoint, which is providing digital excess & surplus quote and bind and has integrated into the Bold Penguin platform.

Of course, there is one other winner of Insurtech 1.0: independent agents. Commercial insurance still requires distribution through commercial agents. And so, the technologies that focused on empowering these agents are the big winners.

Commercial insurtechs that power insurance agencies have enabled a shift in small business buying behavior. If you look at the history of the Bold Penguin products, you can see a progression towards digital quoting solutions that are provided directly to the small business. And, while the business may be shopping for quotes, they still want to be connected to an agent for choosing and binding a final policy.

As one attendee at our conference pointed out, this has not led to a race to the bottom, as many feared, but instead insurance carriers are realizing the power and efficiency of digital distribution.

As an example, Bold Penguin started with its Exchange in 2016, a solution where small businesses looking for insurance were connected to insurance agents. Once connected, these agents then quoted offline or via carrier portals. Now, Bold Penguin has launched multiple products where agents or customers can get digital quotes. The small business insurance buying process stays within the Bold Penguin platform, keeping things simple for agents.

Each product has moved the customer closer to the quoting process, while the agent always provides the expertise needed to bind a policy.

This is agent-powered insurtech and we think this is the future of Insurtech 2.0.

Welcome to the future.

If you are interested in a copy of the Insurtech Smokeout Presentation, or having it presented at your conference or event, please contact chris.cheatham@boldpenguin.com.

Insurance Marketing 101: Here’s How to Do It

Efficiency is the name of the game for future insurtech solutions

Our newsletter will show you how
Thank you! Your submission has been received!
Oops! Something went wrong while submitting the form.